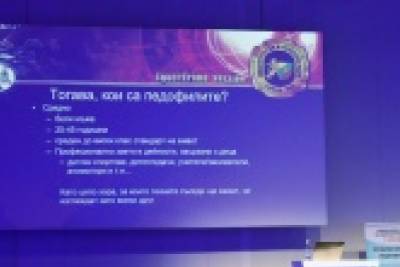 97% of Bulgarian children use the Internet and 93% of them access the global network daily or almost every day, mainly using the social media. 40% of children's profiles in Facebook are public, which leads to a number of safety issues. One of them is the common practice of children lying about their age while signing up to social media. The data was announced to the first generation of digital parents by Georgi Apostolov, coordinator at the Safer Internet Centre during the first parents meeting IT’S UP TO US! The event was organised by Telenor in partnership with the Safer Internet Center, Parents Association, the website "Maiko Mila!” and was held during last weekend at the Sofia Event Centre.

"Over the past six years, child online and offline bullying has grown considerably. A recent survey shows that more than 80% of children in the past year received online messages that bothered them. The highest percentage of the recipients of those messages are children aged 9 to 11 - 86%. However, only 57% of parents admit that children share with them when this happens," Georgi Apostolov said as he presented the results of a survey conducted by the Safer Internet Center. "80% of children say they know how to upload their own video content on the Internet. We should not stop them from doing that, but instead we need to familiarise them with the risks that this entails and take advantage of available tools to improve their safety,” he added.

"Children aged 8 to 14 are the most endangered group of users on the Internet because of their fragile age and lack of experience. The most common cases of cyber-bullying are related to children living in a complicated family environment or in families who show no interest or do not control their children while they use the computer. The fact that the child is in their room is no longer enough for their safety if there is a computer in the room," said Commissioner Yavor Kolev, Head of Transborder Organised Crime with General Directorate Combatting Organised Crime at the Ministry of the Interrior, while discussing pedophiles on the Internet. "Statistics show that the pedophiles or people who have a sexual interest in children are at least 1% of the population. This means that in Bulgaria there are more than 50,000 people from whom we have to protect our children," he added.

What we need to know about our children, how to be a successful parent in the digital era, the threats in the online communication, and what children do in social media networks were just some of the hot topics presented to the first generation of digital parents. Yana Aleksieva, Executive Director of the Parents Association and Justine Toms, a specialist with extensive online media and marketing experience, guided parents through the infinite spaces of the Internet and presented them the opportunities and the threats. Dean Blagoev, Manager at Bulbera, calmed their fears by presenting a solution for protection, the Bulgarian tablet and smartphone application Protect Your Kid.

The afternoon session included even more trendy topics for parents such as early sexual education and how to communicate effectively with our children. Dr. Radosveta Stamenkova, Executive Director of the Bulgarian Family Planning and Sexual Health Association and Mihail Stefanov, Founder of the online Mini Machini platform, gave tips to parents how to better communicate with their children and to understand their interests and needs.

Young Entrepreneur Chris Zahariev showed how he creates the content for his over 55,000 young fans on YouTube. In the final part of the event Evelina Pavlova, Founder of Teen Station - the first platform for school media, and Ekaterina Mihaylova, Technical Director of the Bulgarian IT company Majio, showed parents the secrets of the most popular entertainment channels for children - art and games.

More information about the event as well as video recordings of lectures can be found in a few days at: https://web.facebook.com/events/150663375623123/.