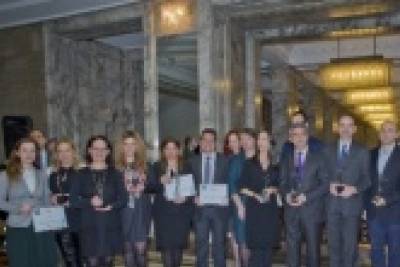 BBLF companies won 4 out of 8 categories

For the 11th time the Bulgarian Donors Forum announced winners of the Biggest Corporate Donor awards.

Prizes are awarded for the amount of corporate financial investments in 2015. In addition, an 8-member jury that includes BBLF’s deputy executive director Gabriela Marinova also ranked the quality of their programmes.

The award ceremony took place on 24 November 2016 and was hosted by President Rosen Plevneliev.

37 entries in 8 categories took part in the competition this year.

AVON with For Love for Life – AVON Against Breast Cancer won Best Donors Programme. Nova Broadcasting Group’s The Change is winner of Most Sustainable Donor Programme. AbbVie won Best SME Donor Programme with the You Lead the Change programme. The Best Partnership award went to UNICEF and bTV Media Group for Together for Every Child campaign.

The Bulgarian Donors Forum also awarded President Rosen Plevneliev for his contribution to the development of the culture of donation in Bulgaria. Throughout his mandate he publicly recognized the efforts of donors while the Presidency accommodated a number of civil sector initiatives.