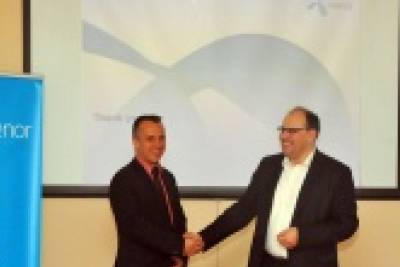 For the fifth consecutive year Telenor continues to support the Team of Hope project for social integration of unprivileged youth through football, part of the international initiative of the Homeless World Cup Foundation.

‘At Telenor we believe there are many talented people in disadvantaged social groups who remain undiscovered. Thanks to the Team of Hope, such talents get the chance to not only develop their football skills but also get more confident and responsible, and to change their lives. And most importantly, this initiative helps both its beneficiaries and the society grow’, Mr. Guev said.

The Team of Hope project is organised by Sports Management Bulgaria. Once again, this year it will target both young people living in institutions for children deprived of parental care, and underserved groups in various parts of the country.

After a series of football tournaments Team of Hope coach Mladen Hristov will select the players who will comprise Bulgaria’s national homeless football team that will represent this country at the Homeless World Cup in Glasgow, Scotland, 10-16 July 2016. The team will participate in the world tournament for the fifth time after its debut in Mexico City in 2012. Last year in Amsterdam the team marked its best ranking getting to the 9th place among a total of 47 teams.

Telenor Bulgaria is a leading telecommunication company with 3.8 million active subscribers in Bulgaria. As of end-2015, the company’s services are available to 99.98% of Bulgaria’s population, covering 99.5% of the country’s territory, and Telenor 4G network covers approximately 57% of the population. By 4 November 2014, the company operated under the GLOBUL brand. Since 1 August 2013, it has been part of Telenor Group which operates in 13 countries in Europe and Asia and has 203 million subscribers.