Nestle Bulgaria With a Eur 3 Million Investment In Sustainable Development 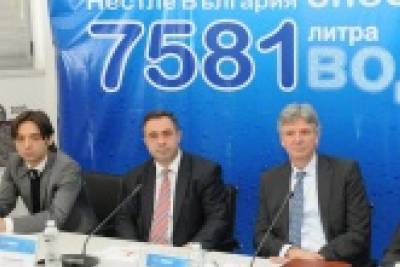 On the occasion of World Water Day, the Minister of Environment and Water learned about the company’s investments of up to BGN 176 million

Nestlé Bulgaria announced that since 2003 it has invested more than BGN 176 million in the country, planning to invest by the end of 2015 another BGN 2.5 million in modern technology, product quality, team training, material and supplier sourcing, consumer health care, and water and environmental protection systems. At a special event on the occasion of the World Water Day, Juan Carlos Peralejo, CEO of Nestlé Bulgaria, presented the company’s investment policy and projects aimed at water and environmental protection in the presence of the Minister of Environment and Water Velina Vasileva, the Ambassador of the Swiss Confederation to Bulgaria H.E. Denis Knobel, the Deputy Minister of Environment and Water Krasimir Zhivkov; the executive director of the Regional Inspectorate of Environment and Water Irena Petkova, the Sector and Investment Services Manager of the Bulgarian Investment Agency Petar Penchev, and the executive director of Ecopack Bulgaria Todor Burgudzhiev.

“As a founding member of the United Nations Global Compact CEO Water Mandate, Nestlé is committed to working with a major focus on water. Bulgaria is part of this commitment. For us, the attitude towards water and the link between production practices, water use and water resource exploitation affects every business, regardless of its industry. As a company operating for 21 years in Bulgaria, we are investing heavily in modern high-tech improvements to reduce water and energy consumption in our operations. As a result, Nestlé Bulgaria saves 7,500 liters of water per hour in its production processes. To achieve sustainability, however, we need the combined efforts of all stakeholders. Positive change can be achieved only through the active cooperation of businesses, institutions and society. We would like to thank our partners at Ecopack Bulgaria, who joined us and supported us today,” said Juan Carlos Peralejo, CEO of Nestlé Bulgaria.

At the event, Nestlé officially presented the latest cutting-edge equipment in its chocolate and biscuit factory in Sofia – a next-generation steam station with investments of over BGN 1.5 million. The company said that in the last 5 years it has invested over BGN 3 million in projects aimed at innovations that contribute to environmental protection and water. Following these investments, Nestlé Bulgaria has reduced the amount of water used in its operations by 40% over the past 5 years.

In support of Nestlé Bulgaria’s focus on sustainability, the Executive Director of ECOPACK Bulgaria Todor Burgurgzhiev gave the company a certificate commemorating its contribution to environmental protection. The document states that as a result of the company’s activities over the past 10 years, it has saved more than 200,000 trees and over 500,000 liters of water, more than 73 million kilowatts hours of electricity and more than 42,000 barrels of oil.

As part of the world’s largest food and beverage company for 21 years on the Bulgarian market, Nestlé Bulgaria has established itself as one of the largest strategic investors in the food industry, a loyal and reliable partner, and a preferred employer. Currently, Nestlé Bulgaria employs 1,500 people across the country.

Nestlé operates two facilities in the country – its chocolate and biscuit factory in Sofia, which has more than 76 years of experience, and the ice cream factory in Varna. Nestlé Bulgaria’s chocolate and biscuit factory in Sofia was chosen to be a competence center for chocolate production in Europe and in 2007 it became one of the three largest production centers of KIT KAT® on the continent. About 70% of the factory production is exported to more than 30 countries, mainly in Europe and Canada (European markets include the UK, Germany, Poland, Hungary, France, Switzerland, etc.). In 2008, Nestlé Ice Cream Bulgaria restructured its production in the Balkans and much of the ice cream production for Romania began to be exported from the company’s factory in Varna. Today, about 30% of the production of the ice cream factory of Nestlé Bulgaria is exported (mainly to the Balkans).

Sharing best practices aimed at protecting the environment in the communities where Nestlé operates, contributes to the creation of shared value. In this area, the company has taken significant steps to reduce water consumption and is constantly implementing projects to use renewable energy and other natural resources, to reduce greenhouse gas (GHG) emissions, to eliminate waste and to improve the environmental performance of its packaging. Between 2008 and 2014, the company implemented a number of activities aimed at ensuring environmentally-friendly practices, saving more than 66,000 cubic meters of water a year (182 cubic meters per day).