Aurubis Bulgaria is Investor in Environmental Protection for 2014 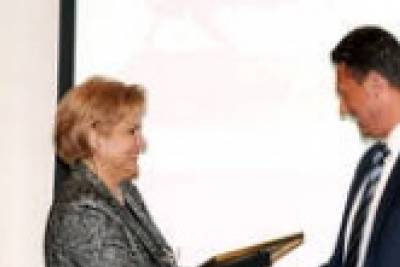 Aurubis Bulgaria was awarded Investor in Еnvironmental Protection for investments in 2014 at an official ceremony where for ninth consecutive year the Bulgarian Investment Agency (BIA) bestowed its annual Investor of the Year awards. The event was attended by the President of Bulgaria Rosen Plevneliev, government members and business representatives.

"This prestigious award is high recognition and deserved prize for the diligence, responsibility and professionalism of our team during the implementation of important industrial and environmental projects", said Tim Kurth, Executive Director. He received the plaquette and certificate by Menda Stoyanova, chairman of the Committee on Budget and Finance in the National Assembly.

In 2014 the company has successfully realized several important environmental projects. The investment programme Aurubis Bulgaria 2014 with a total amount of €44.2 million, 60% of which involves measures for environmental protection with a total capital expenditure of more than €26 million. Another significant investment is the construction of Rainwater Treatment Plant worth €6.3 million, with the operation of which rainwater the premises from the whole industrial territory. During this period has been successfully finalized another important project -recycling of waste raw materials and introducing a new product of the plant with the co-financing of Operational Programme Competitiveness of Bulgarian Economy 2007-2013, funded by the European Union through the European Regional Development Fund and the national budget of the Republic.

BIA awarded companies that have made a significant step in its development through sustainable and efficient investments, creating new jobs, introduction of new technologies, which is consistent with the goal of smart and sustainable economic growth. This year the agency received over 80 applications from organizations in all sectors of the economy, and after discussion and evaluation by objective methodology, 26 companies reached the final stage of the competition. The award is statue of golden bull, made by the sculpture Seyfetin Shekerov and crystal plaque.

From the company privatization in 1997 until now, almost €500 million has been invested in modernization and improving the parameters for environmental impact. As a result of technical and organizational improvements, the specific emissions of SO2 have been reduced by 95% since 2000, and dust and heavy metals over 99%.