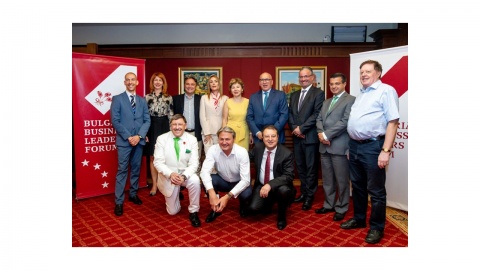 The General Assembly also elected  four members of the Board

The Annual General Assembly of the Bulgarian Business Leaders Forum (BBLF) held on 31 May 2022 elected Levon Hampartzoumian as Chairman for a second consecutive term. The delegates also voted in favour of four members of the Management Board: Vesela Ilieva (Unique Estates), Vladislav Mihov (JTI Bulgaria), Kamelia Slaveykova (Shell Bulgaria) and Karel Kral (Electrohold Bulgaria). The meeting in Grand Hotel Sofia was attended by CEOs and senior managers of over 35 member companies of the organisation.

As a result of his successful tenure at the helm of BBLF, this country’s biggest and most reputed association of companies that embrace responsibility and sustainability, financier Levon Hampartzoumian (LV Advisors) will continue to serve as Chairman for the next three years. He thanked for the active participation and support of the member companies in the Forum's projects and initiatives over the past year and pointed out that joint efforts for the country's economic and social development are particularly vital in times of challenges, as the recent months have shown.

After a contested vote for five candidates vying for the four vacancies on the BBLF Board, delegates re-elected four of its current members: Vesela Ilieva - Managing Partner of Unique Estates, Vladislav Mihov - General Manager of JTI Bulgaria, Kamelia Slaveykova – Chairperson of the Board of Directors of Shell Bulgaria, and Karel Kral - CEO of Electrohold Bulgaria. They all committed to  continue to encourage business ethics and transparency, protect the interests of member companies and promote their efforts and achievements in adhering to good governance, social responsibility and sustainable development, and to continue the dialogue with all stakeholders.

A special guest was Tim Buisseret, Head of the Economic Section at the British Embassy in Sofia, who highlighted the long-standing partnership with the Forum.

Executive Director George Ruitchev reviewed BBLF’s projects and events over the last 12 months and Controller Gilbert McCaul (KPMG) presented his report for 2021. The AGM also adopted the financial statements for the past period.

At the end of the meeting the guests - representatives of some of the largest and most successful companies in Bulgaria - exchanged ideas for partnership and development.