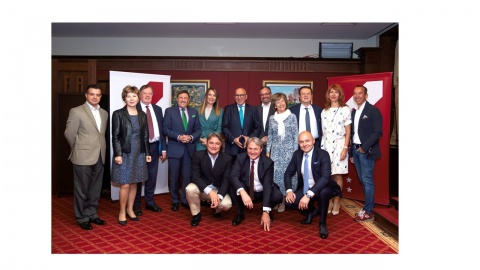 Anton Panayotov was elected deputy chair, and five members were elected to the Management Board

On 1 June 2021, the General Assembly of the Bulgarian Business Leaders Forum (BBLF) elected a new deputy chairman and five members of the Management Board. The meeting was held in person at Grand Hotel Sofia with social distance and other precautions in place.

Senior executives of 40 BBLF member companies voted in favour of Anton Panayotov, CEO of Alaric Securities, who took over the role of deputy chair from Iravan Hira. "BBLF is a vital and effective organisation of responsible business because it brings together like-minded people. I believe that we are all united in our endeavor to make Bulgaria the country we want to live in: a great place to invest, work and live in," he said.

Iravan Hira (HPE operated by Selectium) resigned after three successful mandates at the helm (he was chair for two consecutive terms and deputy chair, too).

They replace Zoya Paunova (AstraZeneca Bulgaria) and Boryana Manolova (Siemens Bulgaria)who contributed greatly to BBLF’s growth over the years and will continue to promote its values.

As a representative of the pharmaceutical company she built a career in, Zoya Paunova has been part of BBLF since its very launch in 1998 and one of the engines behind its establishment as a dynamic association of responsible companies, and an active advocate of our causes.

The newly elected members of the Management Board committed to working to encouragebusiness ethics standards and transparency, to continue the interaction with the institutions and all stakeholders, as well as to defend the interests of BBLF members.

Attendees were greeted by BBLF chair Levon Hampartzoumian and executive director George Ruitchev. A special guest of the event was Dr. Rob Dixon, British Ambassador to Bulgaria who pointed out the long-standing partnership between BBLF and the British Embassy, ​​and emphasized the need for green business initiatives and sustainable development.

Levon Hampartzoumian welcomed member companies by saying: “For 23 years the Bulgarian Business Leaders Forum has been promoting transparency and good practices to make the business climate more favourable for both local companies and foreign investors and foster economic growth, social transformation and well-being. Thank you for your support in the turbulent 2020, which showed us that we are on the right track and will continue to work actively to change Bulgaria for the better.“

George Ruitchev reported on the activities for the past period, emphasizing the Forum had to adapt and transform in 2020 to meet the challenges of the pandemic and the record 22 companies that joined BBLF since September 2020.

BBLF Controller Gilbert McCaul (KPMG) presented his report for 2020. The General Assembly also adopted the financial statements for the past period.

Attendees representing some of the largest and most successful companies in Bulgaria, had the opportunity to network and exchange ideas for development and cooperation.