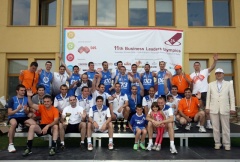 On 28 June 2014 the up-to-date premises of the Anglo-American School of Sofia (AAS) welcomed for the fifth time the Business Leaders Olympics, BBLF’s annual celebration of team spirit and fair play. The games held for the 11th time rallied a record number of guests: some 500 managers and staff and their families took part in the event demonstrating that social responsibility of companies and a healthy and active lifestyle are vital concepts they all embrace.

Representatives of 40 of the biggest companies in this country, not only BBLF members but also friends of the Forum, competed for cups and medals in games such as football, basketball, volleyball, badminton, tennis, darts, chess, backgammon, arm wrestling, cards and more.

Inspired by all the Cup action in Brazil the football teams entered some hot competition. Hewlett Packard won the championship for the third year in a row and CEZ took the silver. United Bulgarian Bank’s team ranked third after beating Hilton Sofia.

Hewlett Packard players won the cup also in the heated basketball game. They were closely followed by United Bulgarian Bank and Postbank got the bronze after prevailing over Dundee Precious Metals Chelopech who enjoyed the strongest pack of supporters.

A Hewlett Packard team was the one to win the volleyball game too followed by Dundee Precious Metals Chelopech and the Anglo-American School.

In individual games players from Mtel, CEZ, TNT, Curtis/Balkan, Postbank, the Anglo-American School, BNP Paribas, Astra Zeneca prevailed. The salsa lesson did not only attract a crowd but also ended in three cup winners. Following the successful introduction last year the Olympics again featured artificial wall climbing provided by the world’s top manufacturer, Walltopia. Airsoft shooting, a newcomer to the games courtesy of Race Gun Shooting Club proved to be a magnet: over 80 enthusiasts joined the contest. Guests also tried their luck in the traditional raffle that saw over 50 eye-catching prizes distributed.

A couple of raffle prizes are yet to be distributed. Please check your tickets and call us at 02 986 52 02 to arrange getting your prize at our office (winning tickets numbers: 0782 and 0909). The winner who got the voucher provided from Walltopia is welcome to fetch it at our office too.

Congratulations to all the winners! For a full list please go here.

A huge thank you to all of you for your enthusiasm, powerful emotions and kind support! Don’t miss to check out the selected pictures in the Gallery below and the volumes of additional pics on our Facebook page and YouTube profile.